One of my goals for this sabbatical year has been to create some artwork for or about the Los Angeles River. I have always loved that water way coming down the concrete channel, making its way into downtown LA. As a kid, I was enchanted by the cat heads painted on the storm drain release doors. I love the feel of concrete mixed with self planting wild trees, the power lines, and the general feeling of a wild, urban waterway. I am excited that the river is finally getting the ecological attention it needs and look forward to some of the changes that are coming to the river. A little over a week ago I got a call from the Los Angeles River Revitalization Corp. asking if I could possibly create a mural relating to the river for an upcoming community workshop. They needed it ASAP and it had to be a paint-by-number.

I haven’t seen a paint-by-number painting since the 70’s. I have never painted a packaged paint-by-number, let alone create an original 8 feet long one in 5 days. Of course I said “no problem” and stayed up until 2:00 in the morning sketching out some ideas.

The next day I sent off two sketches relating to the river and Miranda at the River Corp. emailed me back with their choice for the mural image. I immediately went and bought a massive roll of canvas and set to work on creating my first ever paint-by-number.

A few days later, the numbered canvas, a bucket of acrylic paints, brushes, and myself rolled up to a massive warehouse along the LA River and waited for the community members to arrive to fill in the numbers. This mural project is part of a program called “Rio Vistas” whereby each dead end that leads to the river in Elysian Valley will be transformed into a small parklet with landscaping, play areas, and an art element. This transformation will be in a series of steps over the next few years and the mural making project was part of the kick off. There were student volunteers from Sotomayor High School Learning Academy and employees from local companies helping plant edible plants, create river signage, and painting the mural I designed. The kids were terrific and truly enjoyed creating a mural in less than two hours. The mural is on canvas that can be moved from site to site. It turned out great and I learned quite a bit about color gradation and value and patience as I filled in every section on the canvas with a number that corresponded to a paint number key. I was thrilled to be part of this event. Here’s some photos of us working together to create the mural. It was a fun day with an amazing community spirit. I am grateful to have been asked to be part of the day and am grateful my sabbatical schedule allows for this type of impromptu creativity. 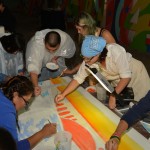 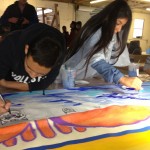 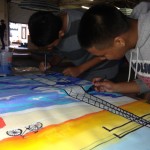 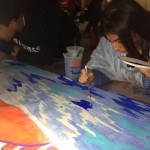 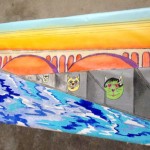 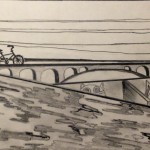 For more information on the RiverLA  Program, go to this link: 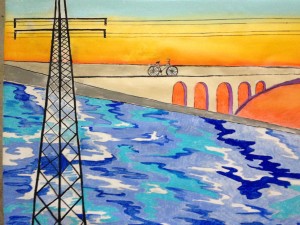 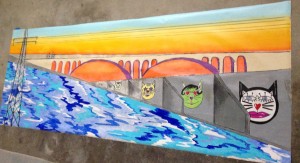 The image is a close up of the power lines and bicycle. There’s a new bike and pedestrian bridge slated to be built across the river this year which will make it much safer to cross the river.

It was difficult to photograph the entire completed mural due to its size, but you can get an idea of the entire mural in this photo.